IF YOU WERE IN CONTROL OF CONGRESS, HOW WOULD YOU REFORM OUR CURRENT ELECTION PROCESS? 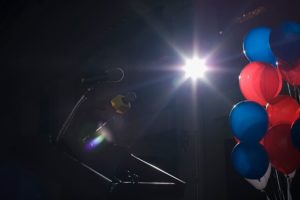 Why do the political machines in Washington spend billions on politics and elections? Because they want to stay in control, and they want more and more power. Does anyone really want to hear or watch another negative commercial? I simply want to hear a candidate, for once, stand up and tell me who they are and how they’re going to fix each of the top 20 problems. Once in office, what laws are they going to pass or remove that will fix the problems and Make America Great Again(TM)? Then, simply keep that promise!

Would you remove all of the Super PACs (political action committees) and SIGs (special interest groups) from the process?
It’s time we take the big money out of the campaigning process: no more Super PACs; no more lobbyists; no more SIGs controlling our representatives in Congress; no more winning an election simply because one candidate can raise more money than the other; and no more winning an election because one candidate can put out more negative ads than the other. It’s time we the taxpayers take control of (and pay for) our own election process to guarantee our voices are the only voices heard by our representatives. 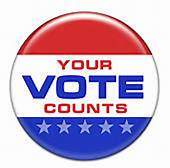 The number one reason America is in trouble is that a lot of Americans are lazy and apathetic when it comes to voting. We assume our one individual vote doesn’t matter. How do I know? Because I too spent many years feeling this way and finally realized what was really happening.

Would you change the campaigning process so no one has an unfair advantage?
Now that my eyes are open and I see the mess we’re in, I promise you that I will never miss any election ever again. Promise me the same. Now that we’ve decided to get just a little bit more involved in the affairs of our government, what do we do? How do we determine who to vote for (who to hire and who to fire)?

If we’re ever going to have a functional Congress again, American voters need a better way to interview the candidates. We need an easier process in which to determine the right candidate for the job. We need to become more informed. We need to know how (in detail) each candidate proposes to fix the problems that they or their predecessors created. How are they going to reform our labor programs, entitlement programs, budget process, tax system, criminal justice system, immigration, education, etc.?

Would you require every candidate to go through the same interviewing process?
Here’s a 5-pronged system that once in place, will remove all outside interference from politics, and make an informed voter out of every America citizen.

Here’s how we can reform the campaigning process, rebuild Congress, and in turn rebuild America:

The American people (or should I say, our representatives) would negotiate with each of the major television networks for the purchase of campaigning airtime. Each of the major networks would bid on an annual campaign package (the same as they do with major league sports). The campaign package would only be needed on even (election) years and would include both federal, state, and local campaigning, and all air time would be paid for by the American people.

Once campaign reform is implemented, it would be illegal for special interest groups, political machines, or anyone aside from the American people, to run campaign ads, etc. Campaigning and the election process would finally be turned back over to the American people. 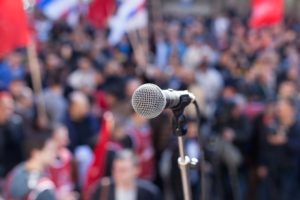 Presidential, congressional, and gubernatorial election campaigning would begin 12 weeks prior to Election Day. Each candidate would receive one (1) hour of personal air time each week to tell us who they are and layout their platform (their list of action items). The hour would be broken down into four 15-minute sessions. Air time for both candidates would be scheduled back-to-back four times each week (alternating who goes first each time).

Local campaigning would begin eight (8) weeks out. Each candidate would receive 30 minutes of personal air time each week, and that time would be broken down into two 15-minute sessions.

In each 15-minute session, the candidate would simply tell the American people who they are, what they stand for, and what (if elected) they would do to fix a specific problem. That’s it! Enough of the negative ads! 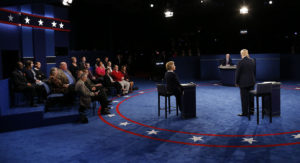 We need to build a National Campaign Information Website (NCIW.gov) for the American people. It would be a site that not only contains information about the candidates’ platforms, but also a site that allows us to rate the candidates as to how their overall views compare to ours. It should be simple and easy to navigate. Please check out our DEMO site at www.NCIW.us.

Here’s what I envision:
Enter your zip code and a page opens with pictures of each of the candidates who are interviewing (campaigning) for specific positions in government on the federal, state, or local level. Click on a candidate’s picture and a drop down menu opens listing all the major issues. Click on one of the issues and a video pops up in which the candidates personally explains, in detail, what they would do to fix that specific problem.

How do we choose the best candidate? We use a simple grading system called the Political Performance Test (PPT) to grade each candidate running for political office on all levels of government. Each candidate gives you their views on a given issue, and you give them a score between 0 and 5 on that specific issue:

The candidate with the higher PPT score best supports your overall views. It shouldn’t matter whether you hire a Common Sense Democrat or a Common Sense Republican, as long as their views are most in align with your views.

The following is an example of how the rating system works.  It is not intended to accurately reflect Senator Schumer's actual political views. 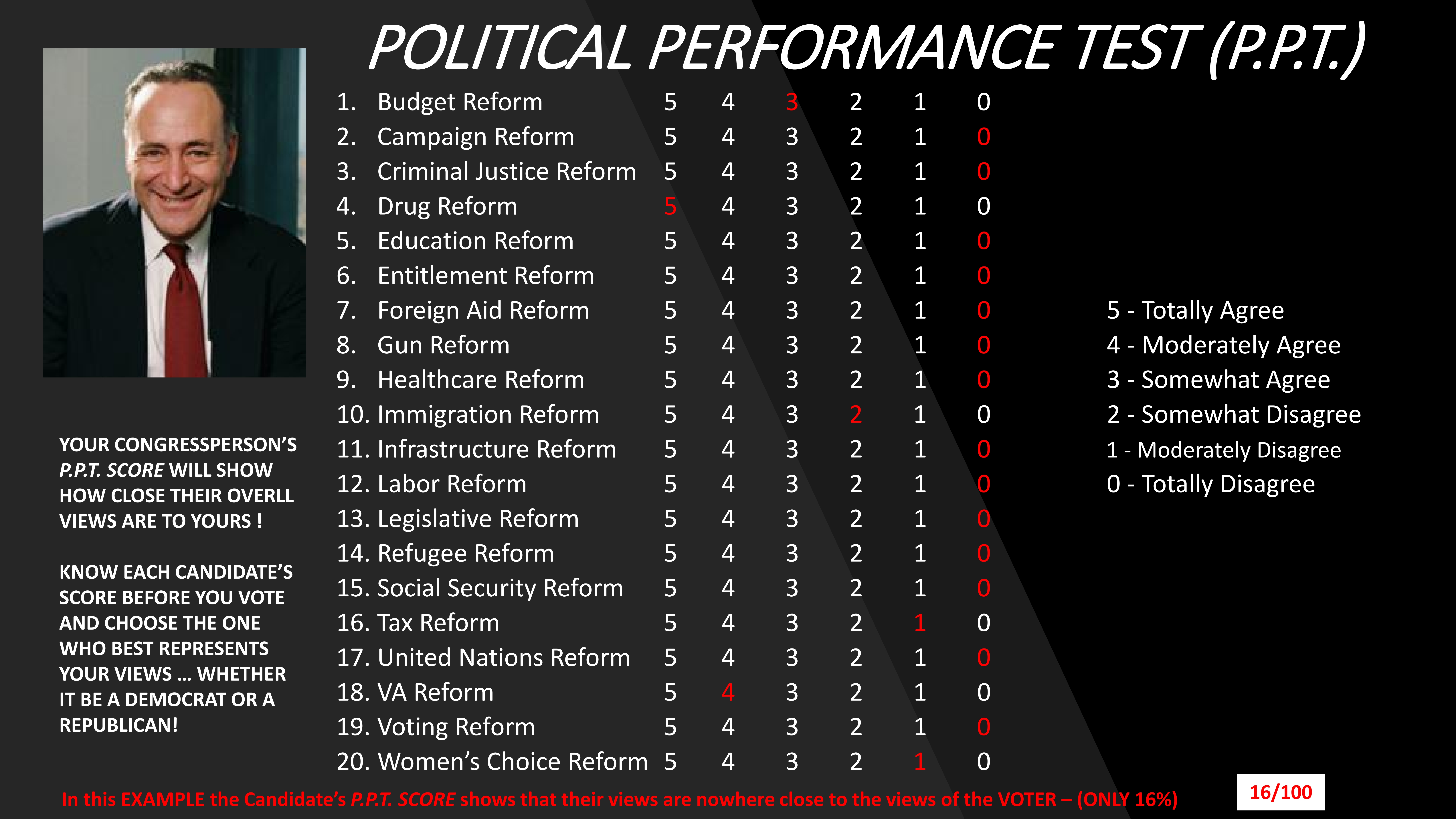 Campaign reform will stop “pay for play” and finally give us the ability to vote into office some honest representatives; individuals who owe nothing to their political parties or to any SIGs; representatives who only have to answer to the American people.

It’s time we demand that every candidate submit their position on each and every issue so that we, the American voters, can make informed decisions. When Congress finally builds a centralized NCIW that includes the means to easily rate the candidates, it will be easy to educate ourselves on the different candidates and easy to determine their PPT score.

In the meantime, email those in office and ask them to visit this website and give you their views on each of the 20 Common Sense reforms. Inform them that we don’t want to accidentally fire the wrong people.