It’s time the media stops being part of the problem and starts becoming part of the solution. Stop driving political and racial wedges between the American people.

I would like to address the entire news media, all talk show hosts, and Hollywood.
It's time to top driving political and racial wedges between the American People. I know sensationalism raises your ratings, and with higher ratings comes job security and more profits, but how about for once, you forego all of that and put your country and the American people first? Please help us fix the problems. It’s time those in the media start becoming part of the solution, rather than part of the problem.

Talking about fixing Congress or America is quite boring, but I would rather be bored, and get things fixed than be entertained and never get anything accomplished.

I know those in media and those in the actor’s guild are a tight-knit group, just like the politicians on Capitol Hill, but it’s time each of you start thinking for yourselves. It’s time you call out your colleagues when they start acting like arrogant asses.

You most likely got into your profession to make a difference in the world. How’s that working out for you? Do you really feel a sense of accomplishment every time you crack on someone? Do you really want to follow in the footsteps of the National Inquirer just for ratings? How about leading the American people down a positive road for a change?

How about instead of trying to dig up dirt or embarrassing someone, you try to help the American people really fix Congress? How about you help us press Congress to enact campaign reform so we can learn who we’re hiring to manage our country?

What a worthwhile achievement: playing a role in making our country and our world a better place! If you help us pull this off; if you help us hire the right managers to run our country, managers who will get America back on track, we the American people will give each and every one of you a Pulitzer or an Emmy. Hell, we’ll give you one of each, and we’ll even throw in the same lifetime benefit packages our Congress gets. If you want to get rid of the “Fake News” label, it’s time to step up to the plate and help the American people help themselves.

How can you help, you say?
I thought you’d never ask. Start by getting the word out about the American Common Sense movement, and what we’re trying to accomplish. Encourage everyone in your listening audience to write their representatives and demand that they pass campaign reform. This is the cornerstone piece of legislation (the first phase) that will give the American people the ability to hire the right candidates to manage our country.

The next phase is to push for voting reform. Our country belongs to every American citizen, and we need to make it easy for everyone to become involved in the hiring (voting) process. That’s it. Once we have quality managers in place; managers who can work well together, they’ll be able to knock out the problems in no time.

Until Congress enacts campaign reform, we’re going to have to gather the information we need on the candidates the old fashioned way. That’s where the media comes into play. We need the press corps and every available reporter in Washington to camp out on Capitol Hill.

Stop every member of Congress as they are coming and going and ask them all the same 20 Common Sense questions: 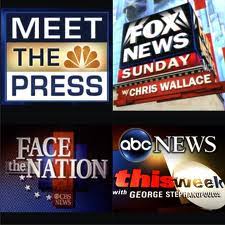 When they’re at home, camp out on their front lawns. Follow them everywhere until they tell the American people what they intend to accomplish if we re-hire them in the next election. Contact every new candidate who’s campaigning against them and ask that candidate the same identical questions. And finally, broadcast the unbiased results of the interviews. This way, the American people will know who to hire/re-hire come election day.

The American people are tired of all of the finger-pointing and the name-calling. We just want to know how each of the candidates would fix each of the given problems so we can make informed decisions on the 535 managers running our country.

I would also like to ask that all the talk show hosts start playing a more positive role in helping the American people fix Congress. It would be greatly appreciated if they would stop all their smart-ass comments, and instead start asking the same “are you for this issue, and if not, what would you do?” questions of all of their political guests. And if they don’t like the Common Sense solutions we offer, they can feel free to offer their own solutions. It’s time we all join together and actually focus on fixing the problems instead of complaining.

We sincerely thank the media in advance for this service to the American people. Do this and the new hashtag will be #Media-Helps-Fix-Congress-Helps-Fix-America. Now this is how to get rid of the term “Fake News”!